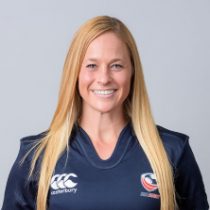 Megan Foster picked up rugby when she was 19 after lettering in volleyball, basketball and soccer in high school. Also a varsity soccer player in college, Foster received the Elite 89 Award given to an NCAA athlete at the pinnacle of their athletic and academic careers. But, feeling the need for a change in scenery, Foster decided to pick up the only D1 program at her university in rugby and never looked back.

Foster continued to excel in developmental assemblies and even won a 2018 Club Sevens National Championship with the San Diego Surfers. She has a Bachelors Degree in Anthropology, with minors in Spanish and Criminal Justice as well as a Bachelor's Certificate in Forensic Identification.

Foster heads into the Women's Rugby Super Series with 5 test caps and has been to one World Sevens events.