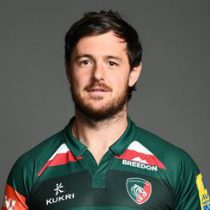 The Tigers Academy graduate made his senior debut for Leicester in March 2006 against the Barbarians at Welford Road and went on to make 227 appearances and score 30 tries for his hometown club.

Smith followed in the footsteps of his father, Ian ‘Dosser’ Smith, in playing for Leicester and the pair achieved the milestones of becoming the first father-and-son combination to both make 100 and 200 appearances for the club.

In May 2019, he announced his retirement from rugby to take on a full-time role with the Tigers Academy programme.