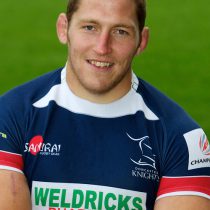 Chall was the stand out player in the Knights promotion winning campaign 2013/14, starting every single game and his efforts were acknowledged at the end of the season with his winning of the Players' Player of the Season.

The talismanic second rower continued to be a cornerstone of the Knights play in 2014/15 making 30 competitive appearances, not only in his usual position of second row but filling in at blindside flanker, and touching down for five crucial tries.

Challinor has been one of the Knights leading performers ever since arriving at Castle Park from fierce rivals Rotherham Titans in 2010.