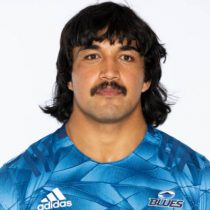 Marcel was playing at Auckland University Rugby since 2012 after leaving Kings College.

A mountain of a man, Marcel has excelled through both the club, and representative ranks in several years, and in 2015 was rewarded for all his hard work and commitment with a call up to the Maori All Blacks squad.

In April 2017, the prop was named in the Provincial Barbarians side to face the British & Irish Lions in their tour opener in Whangarei on June 3.

Renata featured twice against the Lions coming off the bench for the Maori All Blacks and Provincial Barbarians.

The powerful prop, who can play on both sides of the scrum, was called into the Hurricanes squad as injury cover and went on to make two appearances for the Canes in 2018.

He went onto play a crucial role in Auckland's successful Mitre 10 Cup season that ended Canterbury's stronghold on the trophy. He featured twice for the Wellington-based team and committed his services back home with the Blues for 2019.

Marcel made his long-awaited debut for the Blues against the Sunwolves at QBE Stadium in round 4 of the 2019 Super Rugby season, before ending with a total of 7 caps to his name.

He made six further appearances for the Blues during the 2020 season.