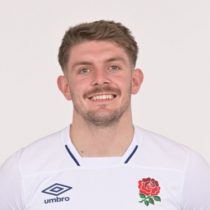 Northmore, who can play at either 12 or 13, played his early rugby at Tavistock RFC, and was a consistent performer for the university side for three years.

He is a close friend of Harlequins’ breakout player this season Alex Dombrandt, with whom he played at Cardiff Met.

Harlequins Head of Rugby Paul Gustard said the Club was impressed by the attitude and application and said Northmore would offer more competition for places in a strong area for the Club who he signed for ahead of the 2019/20 season.

He made his debut off the bench against Saracens in the Premiership Rugby Cup, before picking up an injury.

He returned from his injury to play three Premiership Rugby Shield matches for the Club before back-to-back Heineken Champions Cup games against Bath and ASM Clermont Auvergne; scoring his first try against the French side at The Stoop.

Unfortunately, Northmore sustained an ankle injury against Clermont and is set for around six weeks on the sidelines.

After scoring against Clermont, Harlequins announced that Northmore had signed a new deal with the club for the 2020/21 season.

In January 2022, he signed a new deal with the Quins following 38 appearances for the club.