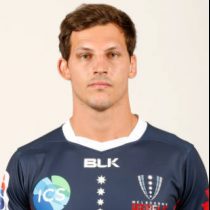 Jones is the prototype modern forward. Tall enough to operate in the second row, he is also athletic and skillful enough to line up anywhere in the back row. He debuted for the Rebels as a blindside flanker, but in his next outing represented his Club as a lock.

He was an integral member of the Club’s Rebel Rising team during its debut season in 2011. His performances throughout the campaign earned him the Rebel Rising Player of the Year Award, to add to his schoolboy and Australian Under 20s honours.

Despite being one of the youngest members of the squad, Jones arrived in Victoria with Super Rugby experience. He played twice for the Western Force in 2010, a side he agreed to join while still at school. This made him the first forward in Australian rugby history to sign on professional terms as a schoolboy.

He began his 2012 Super Rugby season at number 6 in the Rebels season opener against the Waratahs, and continued with the Rebels in 2013 and 2014.

In September 2017, he signed a new two-year deal with Bordeaux-Bégles. After getting an early release from Bordeaux, he returned to Australia and began training with the Rebels.

Jones featured in all but two of the Rebels 16 Super Rugby matches in 2019 before he was recalled to the Wallabies squad ahead of the 2019 Rugby Championship.

He was named in the warm-up squad of World Cup leading into the tournament but missed out on the final squad.

In May 2020, Racing 92 confirmed that Jones along with his Australian team-mate Kurtley Beale will join the Top14 club ahead of the 2020/21 season.

As of September 2020, he has made 2 appearances for the French team.