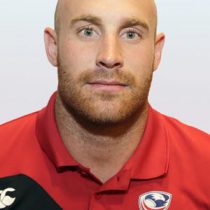 Hume moved to New York City where he began playing Rugby League for the New Your Knights. In 2009, his first year with the team, Hume led the Knights to a league championship and was awarded AMNRL MVP.

He played Rugby Union for Old Blue in New York and in 2012 he made his debut for both the Men's Eagles and Men's Eagles Sevens, helping the USA qualify for the 2013 Rugby World Cup Sevens.

In August 2013, Hume played for Gloucester A as part of a trial but left without a contract, playing for Narbonne the following year before his season was cut short due to injury.

Hume was then named in the USA squad ahead of the Americas Rugby Championship.

In May 2017, Luke was named in the USA Men's Eagles squad for the Emirates Airline Summer Series and Rugby World Cup 2019 Qualifiers this June and July, after winning 20 caps to date.