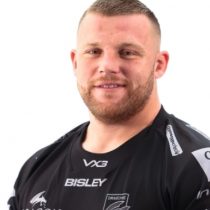 Born in Plymouth, England, Fairbrother is a prop by trade and was educated at Truro College. Fairbrother left school early to link up with the Exeter Chiefs academy. Since joining the Chiefs, he enjoyed several stints at clubs across National League One in England and has run out for the Cornish Pirates in the Championship. He earned his first professional contract with the Chiefs in 2010.

Newport Gwent Dragons signed Welsh-qualified prop Fairbrother from Exeter Chiefs in May 2014. He made 40 first-team appearances for English Championship club Albion, having had a previous spell out on loan at the Cornish Pirates.

Fairbrother joined Dragons in the summer of 2014 and made his debut against Connacht Rugby later that year.

He has since become a hugely popular front rower at the Dragons and hit the hundred game milestone in the 2018/19 season away at Franklin’s Gardens against Northampton Saints.

Ultra-consistent front rower Fairbrother – who has played over a century of games for the Men of Gwent – penned a contract extension with the Dragons in March 2021.

Fairbrother has so far played 138 games for Dragons – putting him at 13th in the all-time appearance-makers for the region.