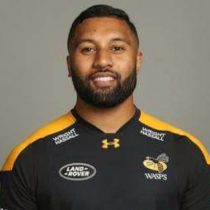 At aged 19, Sopoaga was selected to represent Wellington in the 2010 ITM Cup and made his debut against Manawatu.

Wellington-born and raised, Sopoaga accepted an offer from the Highlanders in 2011 and moved south where he has become a key member of the team.

He quickly established himself as the squad's starting number 10 with a series of mature performances which belied his age.

He finished the season with 88 points in 9 appearances to help Wellington to reach the semi-finals of the competition, where he impressed by scoring 21 points although Wellington fell to eventual champions Canterbury.

Sopoaga was part of New Zealand’s U20 side that retained the junior IRB World Championship title in 2011.

After making 37 appearances for Wellington, Sopoaga followed his former coach Jamie Joseph south, signing on with the Highlanders for the 2011 Super Rugby season.

Expected to back up Colin Slade, he ended up starting the opening game of the season against the Hurricanes with Slade injured, and responded in fine fashion by scoring a try and kicking two penalties in a 14-9 victory.

In 2015, Sopoaga broke the seasonal points scoring record for the Highlanders, with 191 points and is also second-ranked in the franchise’s history for most career points.

After guiding the Highlanders to the Super Rugby title in 2015 he earned an All Black call up and did not disappoint in his debut there either as he guided the NZ side to victory over the Springboks at Ellis Park in the Rugby Championship.

In June 2017, Sopoaga started in the Highlanders historic 23-22 victory over the British and Irish Lions. Later in the year he featured for the All Blacks in the Rugby Championship and scored his first test try against South Africa.

Sopoaga played 88 matches for the Highlanders, scoring 853 points in his time there. He has also represented the All Blacks 18 times scoring 61 points.

In January 2018, Sopoaga signed a three-year deal with Premiership side Wasps.
His first season in the Black and Gold saw him rack up 163 points in 25 appearances - and he soon crossed the 200-point threshold in the 2019/20 season