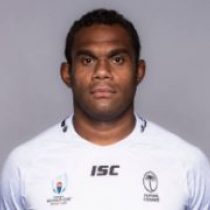 Nakarawa is generally considered to be one of the best Lock forwards in the world. He is most famous for his off loading skills, athleticism and general play in open field. The talented second-row forward debuted for Fiji against Tonga at Nuku'alofa on 13 June 2009. He played in the Pacific Nations Cup for Fiji in 2010 and was one of Fiji's only bright sparks in their campaign at the 2011 Rugby World Cup.

In 2011, New Zealand had to make an exemption to their ban on Fiji Military personnel entering the country in order for Nakarawa to play in the World Cup games. He later quit the army to focus fully on his rugby career. Nakarawa played for Fiji Barbarians and resisted moves to France and England; not moving to Europe until signing his first professional contract with Glasgow Warriors.

He signed for Glasgow Warriors in August 2013. While with the Warriors, he occasionally turned out for the amateur club Glasgow Hawks. Nakarawa was named Man of the Match for Glasgow in the 2015 Pro12 Grand Final in Belfast, he had the most offloads in the 2014–15 European Rugby Champions Cup with 25.

After a hugely successful season, he was selected to play for Fijian national team at the 2015 Rugby World Cup in England. He was subsequently named in the World Cup Dream Team at the end of the tournament. At the 2016 Summer Olympics, Nakarawa was part of the Fiji team in rugby sevens, where he scored a try in the final in a one-sided 43-7 victory over Great Britain to claim the gold medal, which was also Fiji's first ever Olympic medal in any sport.

The Fijian powerhouse was named the EPCR player of the season after helping Racing 92 to the 2017/18 Champions Cup Final. Nakarawa made more offloads (76) and carries (291) than any other player during the 2017/18 Top 14 season.

In June he signed a new three-year deal with the club. As of the 2018/2019 Champions Cup, Nakarawa has had 29 European Cups appearances scoring 6 tries and 30 points.

In June 2020, Nakarawa signed a new deal with Glasgow until 2021. In January 2021, Ulster confirmed the signing of Nakarawa on a one-year deal.