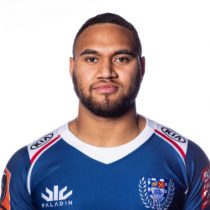 After attending high school at the Dilworth School in his native Auckland, Finau headed south to Christchurch to study sports coaching at the University of Canterbury. There, he attended the Crusaders Academy and played club rugby with the Christchurch Rugby Club.

Finau was a member of the New Zealand Under 20 team which competed in the 2014 Junior World Championship and made 3 appearances.

Impressive form at club level saw Finau named in the Canterbury Mitre 10 Cup squad for the first time in 2016. He made 7 appearances of which 6 came from the replacements bench and scored 1 try as the Cantabrians lifted the Premiership title, their 8th in 9 seasons.

Finau was named in the Provincial Barbarians squad to face the British and Irish Lions, he started the match but left the field injured 18 minutes into the match.

He returned to action for Canterbury in the 2017 Mitre 10 Cup season and after missing out in 2018 joined the squad again ahead of the 2019 Mitre 10 Cup campaign.

Finau, selected for the Crusaders squad ahead of the 2020 Super Rugby season but wasn't able to break into the squad for the 2020 season.