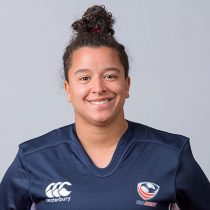 Kaitlyn Broughton picked up rugby at the age of 17 after spending 10 years as a basketball player and three years running track. Adopting the sport quickly, Broughton was a three-time Collegiate All-American in both 7s and 15s in 2015, 2016 and 2017.

In 2018, she was scouted by the Women's National Team and earned her first cap against the New Zealand Black Ferns in November at The Rugby Weekend in Chicago.

Broughton has her Bachelor's Degree in Computer Science from Life University.