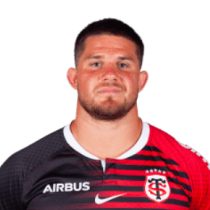 Julien trained at US Montréjeau for five years before joining the training centre of Toulouse in 2009.

He represented France at the 2015 U20 Six Nations tournament and played in the 2015 World Junior Championship in Italy, reaching the semi-final with Les Bleus.

He made his debut for the first team during the 2014-15 season and played regularly under Guy Noves before the arrival of Ugo Mola and Fabien Pelous.

In July 2016, Julien was named among a list of 30 players under 23 with potential to become a full international over the next few seasons.

He enjoyed a prolonged spell in the first XV during the 2016-17 Top 14 season featuring on 21 occasions and finished with 4 tries.

In October 2017, Marchand signed a new deal with Toulouse and extended his contract with the club until 2021.

During the 2018/19 season he was announced as Toulouse's new captain. In October 2018, a call-up to the France senior squad for the November Internationals followed.

He made his test debut against Fiji and made another appearance for the side during the 2019 Six Nations but missed out on a place in the Rugby World Cup squad.

He was recalled to the squad for the 2020 Six Nations.