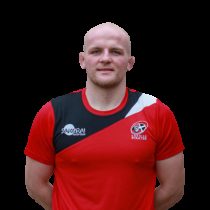 Josh was raised in Taunton, he represented England at U16 and U18 levels.

Part of England Under-20s squad that reach this summer’s Junior World Championships in Georgia, Josh Caulfield is a powerful forward who has come through the Exeter Chiefs Academy

Keen to blood him further in a higher standard, Caulfield was dual-registered with Championship outfit Cornish Pirates, a move which suited all parties during an industrious first season at the Mennaye.

Caulfield was a regular fixture within the Pirates ranks, featuring in 13 appearances, whilst he made his senior Chiefs debut in the Anglo-Welsh Cup win against the Cardiff Blues in November 2016

In November 2020, he signed a short-term deal with Wasps as injury cover.