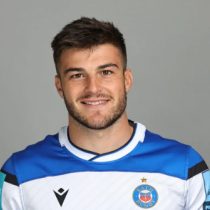 A former pupil at Millfield School, Bayliss helped guide England U20 to a Six Nations Grand Slam and a place in the final of the 2017 World Rugby U20 Championship alongside Club teammate Zach Mercer.

Josh also represented England Saxons U16 and England U17. He scored a try on his second appearance for England U18 in the 33-8 win over South Africa A on tour.

He graduated from the Bath Rugby Junior Academy to become a member of the senior academy for 2016/17. He has been selected in England U20 squad for the 2017 campaign

It was also a breakthrough year for Bath, where he made his first-team debut against Leicester in the Anglo-Welsh Cup in November 2016. He made further appearances against Scarlets and Gloucester underlining his undoubted potential.

His powerful presence at the base of the scrum and relentless work-rate around the field combine to make him a very exciting prospect.

2017-18 proved to be another hugely successful season for the young flanker. After captaining the Bath United side and featuring in the First Team's Anglo-Welsh campaign in 2017-18, Bayliss was awarded Academy Player of the Year, before signing his first senior contract and moving to the first team in June 2018.

Bayliss has since become a regular in the first team squad, and was nominated for the Premiership Rugby Cup Breakthrough Player of the Season award in the 2018/19 season.