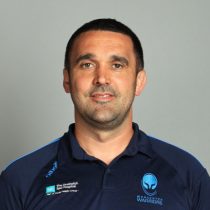 Usually a flanker, Thomas has previously played as a number eight and a lock. Known for his tremendous ball carrying abilities, Thomas cut his rugby teeth at Pembroke RFC before he joined Swansea and then the Ospreys.

He represented Wales from U16’s to seniors, and was part of Wales 2003 World squad where he won rave reviews thanks to his virtuoso display against New Zealand.

With the regionalisation of Welsh rugby in 2003, Swansea combined with Neath to form the Ospreys, where over a 10-year period Thomas won four league titles and an Anglo-Welsh Cup. He was the youngest player to captain the Ospreys. At the time of leaving he was the joint highest appearance holder, together with Andrew Bishop on 188 appearance

He also played in the 2007 Rugby World Cup. Thomas was part of two Six Nations Grand Slams, in 2005, and in 2008 where he started every game. Thomas was included in every Wales Six Nations squad between 2004 and 2011. In his 67 appearances for Wales he scored seven tries.

Thomas was appointed Bristol Rugby's Forwards Coach in 2018 on a one-season deal, following the departure of Mark Bakewell.

In Jan 2021, Warriors announced that Thomas was promoted to the role of Head Coach in accordance with the club’s strategic plan.