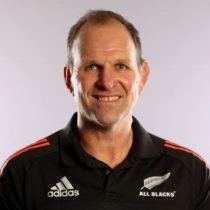 Now a respected coach, John Plumtree began his coaching career after a successful playing one which saw him represent Taranaki, Hawke's Bay and South Africa's Natal Sharks between 1985 and 1997.

Plumtree represented Taranaki in the NPC 40 times, debuting in 1985 before he was selected to participate in trials for the All Blacks team the following year. As a player, he won two Currie Cup medals with the Sharks (1990, 1996), and in 1992, he briefly returned to New Zealand to play 14 games for Hawke's Bay. After retiring as a player, he was appointed coach for NPC team, the Wellington Lions. Under his management, the Lions reached the final playoffs in 2003, 2004 and 2006.

He returned to South Africa as coach of the Sharks, and guided the team to Currie Cup wins in 2008 and 2010. Plumtree's taste of international rugby includes working as a forwards coach with Ireland before joining the Hurricanes in 2015.

The Taranaki-born and raised Plumtree became key member of the Hurricanes coaching staff, working as an assistant to head coach Chris Boyd for the last three seasons, joining Japan on a short term basis as a defence coach with the approval of both New Zealand Rugby and his Super Rugby employers.

In March 2018, The Hurricanes and New Zealand Rugby announced that Plumtree will take the Head Coach role for the 2019 Super Rugby season. His only season as the Hurricanes head coach saw the side reach the Super Rugby semi-final where they were beaten by eventual champions the Crusaders.

After the 2019 Rugby World Cup in Japan, Plumtree joined the new All Blacks coaching team under Ian Foster as the side's Forward's coach.

July 2022 saw him leave the All Blacks, with Jason Ryan named his successor.