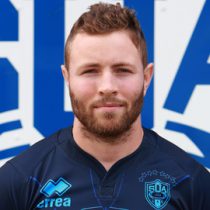 Johan Sadie started his professional rugby career in 2010 with Western Province in the Currie Cup and the Stormers in Super Rugby.

He then had a year stint with the Bulls, before joining the Cheetahs ahead of the 2013 season.

The Japanese side Red Hurricanes then contracted Sadie for the 2014/15 season.

The former Springbok U20 career led him to France in 2015 when he joined Agen in the Top 14.