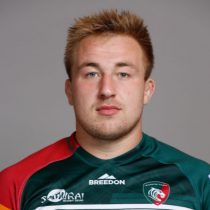 A former member of Nottingham Forest Football Academy, Joe Heyes, was a goalkeeper, like his father Darren and his grandad Bob, but found his rugby niche when joining Nottingham Moderns at the age of 14.

The Tigers prop was named in the England Under-18 squad for a three-match tour of South Africa in August 2017.

He played in all nine England U18 matches in 2017 and was a maiden try-scorer in the 45-24 win over Scotland in the U18 International Series at Ystrad Mynach in April.

After playing in the Under-20s Six Nations as one of the youngest members of the squad, he went to the World Junior Championship in France during the summer of 2018 and played in every round including the Final.

In 2019, Heyes was included in England’s U20 Six Nations squad but failed to make his debut. After the interrupted 2020 Six Nations he was again included in the squad to face the Barbarians and the final round of the Championship

After another 24 appearances for Tigers in 2019/20, he was among 12 uncapped players called into an England training camp at the end of the season ahead of the autumn series.