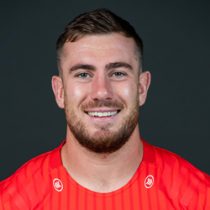 At Castleisland, Hanrahan displayed his ice-cool temperament as he slotted a winning drop-goal for Rockwell in their 2010 semi-final of the Munster Under–16 final before losing the 2010 Munster Schools Rugby Senior Cup Final to Presentation Brothers College.

After school, the out-half made his provincial debut for Ireland Under 20s against France during the 2011 Under-20 Six Nations Championship. He also played at the 2011 Junior World Championship. Hanrahan made his first senior appearance for Munster against La Rochelle in a non-capped pre-season friendly on 12 August 2011.

He was part of the Munster A team that won the 2012 British and Irish Cup. He was promoted to a professional contract by Munster ahead of the 2012–13 season.

He made his full debut for Munster on 22 September 2012, in a Pro12 fixture against Dragons with his European debut coming off the bench in Munster's second round fixture against Edinburgh at Thomond Park. He made his first start for Munster on 26 October 2012, in a Pro12 game against Zebre, scoring two tries and winning the Man-of-the-Match award. Hanrahan signed a two-year contract extension with Munster in January 2013.


During his three seasons in the Munster first-team squad, Hanrahan played in the Pro12, Heineken Cup and European Champions Cup, winning the Golden Boot Award in 2013/14 for his 88.71% kicking percentage. That season, his match-winning Heineken Cup try against USA Perpignan was nominated for the IRUPA Try of the Year award. Hanrahan was selected in the Emerging Ireland squad on 26 May 2014.

On 7 January 2015, it was confirmed that Hanrahan would leave Munster at the end of the 2014-15 season to join English English Premiership side Northampton Saints. He made his debut for Northampton on 24 October 2015, coming off the bench to replace the injured George Pisi in Saints' 42–16 win against Newcastle Falcons. He started for Northampton in their opening 2015–16 European Rugby Champions Cup pool game against Scarlets on 14 November 2015, scoring 5 points in his teams 15–11 win. Hanrahan's Saints career was plagued with injuries, however, and he only made 31 appearances for the side in the two seasons he was at the club.

His time in England didn't live up to expectation and JJ secured a move back to Munster for the 2017/18 season. In December 2018, he signed a new deal with Munster Rugby, committing to the province until at least June 2021. Hanrahan won his 100th cap for Munster in their fixture against Italian side Benetton on 12 April 2019, scoring 17 points, including four conversions and three penalties, and winning the Man-of-the-Match award in the provinces 37–28 away win.