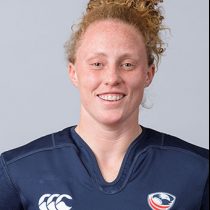 Jennine Duncan was first introduced to rugby by her husband who played for eight years before joining the Seattle Saracens. There, the Saracens women's team recruited Duncan who fell in love with playing the game quickly.

Duncan played softball and soccer for 10 years including at the NCAA Division I level in college. She was the first Division I softball signee in high school, earned All-State honors and held four records. The studded athlete owned four records in soccer, as well.

After turning her attention to rugby, Duncan made waves on the sevens scene. In 2016 she competed in two Falcons tours and was named to the Club 7s National Championship Dream Team. She followed up the honor in 2017 by winning a Club 7s Championship title, Dream Team & Rookie of the Year honors.

In 2018, she was dubbed Seattle Saracens MVP and earned her first cap with the Women's Eagles 15s against England in November of that year.

Duncan owns a Bachelors Degree in Exercise Science and heads into the 2019 Women's Super Rugby Series with two test caps.