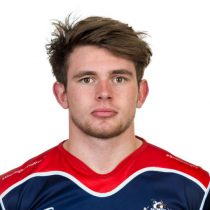 Despite growing up in Brecon, Wales, James Neweyrepresented Ireland at Under 18 level through the Exile program & his efforts in a green shirt earned him his first pro contract with Bristol.

He made just four appearances for the Bears but still managed to score against the Doncaster Knights in the British and Irish Cup in October 2017.

In March 2018, Newey was loaned to the Jersey Reds for the rest of the season from fellow Championship club Bristol.

On loan from Bristol, Newey was just a teenager when he made his Championship debut - featuring four times in the 2017/18 campaign.

His efforts were enough to earn him a full-time contract with The Reds and he’s been impressing ever since, scoring nine tries in 40 appearances over two seasons.