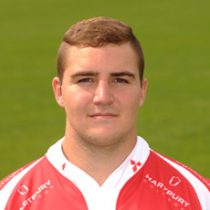 He studied and played for Hartpury College where he was taken on by the Gloucester Academy, playing five times for the Cherry and Whites before spending the past two seasons on loan in the Championship, first with Plymouth Albion and then with Scottish.

Gibbons signed for Ealing Trailfinders at the end of the 2015-16 season from Premiership side Gloucester.

Gibbons is in his first season with club and signed on in time for 2016-17 pre-season from Aviva Premiership side Gloucester. He brought Championship experience from loan spells at London Scottish, for whom he played twice against Ealing Trailfinders, and Plymouth Albion.

In April 2017, Gibbons confirmed that he will be staying with Ealing for the 2017/18 campaign.