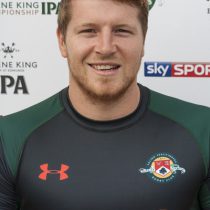 James Cordy-Redden is a veteran 7's player for England. These skills bode him well in the centre position as he dons the Ealing Trailfinders Jersey during the 2016/17 season. His career has seen him move from Surrey to the West of England and play for Cross Keys. After a short loan spell at the Trailfinders in the February of 2016 James impressed enough to be offered a full contract.

The versatile back has appeared at centre, wing and fullback for the Trailfinders, scoring in 6 of his 19 appearances.