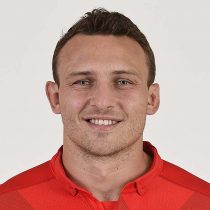 Jake was first elevated into the Reds fulltime squad for 2011 and was rewarded with seven Super Rugby caps, including a starting berth in their final game of the regular season against the Chiefs in Waikato.

Such was the potential of Jake that during the 2010 season he appeared on nine occasions for the Reds despite still being a member of the QAS Reds Academy.

During their campaign he started at least one match at openside flanker, blindside flanker or No.8 – coming after his debut against the Crusaders at Suncorp Stadium. Jake earned the ultimate honour during his debut season in 2010 and was awarded the Reds Rookie of the Year Award. Only a year earlier, Jake was named captain of the Australian Under 20s team for the 2010 Junior World Championships in Argentina.

In June 2017, Schatz who has made two appearances for Australia, joined the recently promoted London Irish from the Melbourne Rebels.

November 2019 saw him being included in Sunwolves' preliminary squad ahead of the 2020 Super Rugby season.

Queensland Rookie of the Year 2010