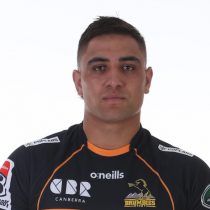 A rapid and opportunistic rise saw Jahrome Brown go from unknown regular Mitre 10 Cup player to a Super Rugby starter in a matter of weeks.

Brown was brought into the Brumbies set up as an injury replacement for Ben Hyne (knee) during the 2019 Super Rugby and against the Reds in Brisbane, from the bench, Brown claimed a first Super Rugby try with his first touch of the ball.

He barely let up from that point on, showing his ability to make big metres with the ball in hand and happy to put his body on the line, making 99 tackles in his 581 minutes of match play.

A product of Hamilton Boy’s High School, Brown will be eager to continue where he left off from in 2019 with his sensational form with the Brumbies earning him a full time contract with the side.