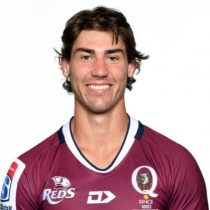 Hardy went to Ballymore from Perth where he was a part of the Future Force program and played U19s and Schoolboys with Western Australia.

He made his Queensland debut in Round 4 on the wing after coming off the bench against the Waratahs at the SCG.

He went on to make his starting debut in Round 8 against the Stormers at Suncorp Stadium before sadly tearing an ACL in his knee at Jonnson Kings Park in Durban against the Sharks and was ruled out for the remainder of the season.