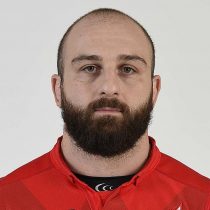 Bregvadze spent three seasons with Top 14 side Toulouse and was part of the Georgia side that finished third in their World Cup pool, securing automatic qualification for 2019.

The hooker, who has over 40 international caps, joined up with Worcester Warriors in October 2015.

Following the 2017 November Internationals, Bregvadze has won 49 caps for the Georgia senior side.

In December 2017, the hooker was confirmed to have signed a contract with the Japanese Sunwolves, becoming the first Georgian player to play Super Rugby