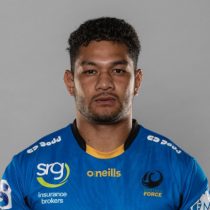 At the age of 16, the talented centre had secured a scholarship to attend his final two years of high school at Anglican Church Grammar School, where his Rugby career began.

He spent two years playing league after high school, as a member of the Parramatta Eels Under-18 and Under-20 squads, before returning to his preferred code in 2012 to join Queensland Premier Rugby side Sunnybank.

In 2013, while playing for the Australian Under-20s Rugby side at the Junior World Championship in France, he suffered a shoulder injury, which required surgery. While having his shoulder reconstructed, the surgeon uncovered an adrenal gland tumour the size of an orange.

He worked hard to return to the field and after an eight-month recovery, he was back playing for Sunnybank, helping steer them to a grand final appearance in 2014.

Taefu missed half of the Queensland Premier Rugby season due to a broken hand, but still managed to rank as Sunnybank’s fifth-highest points scorer for the season. He earned selection with Brisbane City for the National Rugby Championship and spent the majority of the season as starting inside centre in the side’s unbeaten run to back-to-back championships.

Taefu signed for the Reds in 2016 and made his debut against the Waratahs. He scored 11 points in 4 Super Rugby appearances during the 2016 season and went on to play in France for Colomiers before returning to Australia to play for the Western Force. He earned a call up for Samoa in the 2019 Pacific Nations Cup