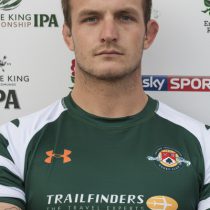 Harry Casson started his career in rugby at Hartpury College and was invited to the Gloucester Academy. His move from Gloucester was after only one appearance for the Cherry and Whites, his move the Worcester Warriors was immediately followed by loan spells at Yorkshire Carnegie, Coventry and Cinderford.

The lock forward made the move to Ealing ahead of the 2016/17 season and ended it with 2 tries in 23 appearances.