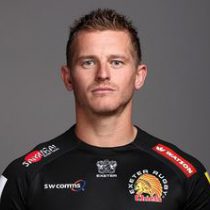 Born in Dungannon, Northern Ireland, Steenson is a talented flyhalf with a dead-eye boot. Steenson began his professional career at Cornish Pirates before being picked up in the summer of 2010 by the Exeter Chiefs.

The Dungannon-born playmaker has since written his name into the folklore of Exeter Rugby Club. Steenson has been at the forefront of Exeter's rise out of the Championship and their subsequent rise to Premiership champions.

He started his playing career back in his native Northern Ireland, initially at Queen's University, then with his hometown club Dungannon, before he was brought into the Ulster Academy as a youngster.

Steenson's dream, like so many around him at that time, was to play for Ulster and for Ireland. Sadly, the dream did not become reality as opportunities at Ravenhill proved somewhat limited. He needed to find a fresh start so, just 22-years-old, Steenson headed to England and that of club side Rotherham.

He impressed during his first year at Clifton Lane and his talents brought him to the attentions of the Pirates, who snapped him up the following season, taking him to the Duchy where he continued to showcase his undoubted talents. Among those to fall foul of his deadly right boot were the Chiefs, who moved swiftly in 2008 to sign the fly-half and add him to their roster as they looked to press their claims for a place in the Premiership.

Steenson quickly settled to life in Devon and in the years that have followed, he has established himself as one of the deadliest goalkickers, not just in England, but in Europe as well.

He not only booted the Chiefs into the Premiership back in 2010 with a majestic display against Bristol in the inaugural Championship play-off final, but since then has continued to sink rivals on all fronts, taking his tally of points past 2,500 and installing him as the club's leading points-scorer of all time. With his metronomic boot, Steenson is a valuable member of the Sandy Park outfit and was pipped by just a solitary point to the Golden Boot award for the 2012-13 Premiership season.

He skippered Exeter to victory in May 2017 to the Premiership title and kicked the winning penalty to sink Wasps at Twickenham and ensure the Chiefs of their biggest prize to date. As well as playing, Steenson is this season starting out on the coaching front, taking up an attack role with National League One side Plymouth Albion.

With over 250 appearances in all competitions and a points tally of 2,331, Gareth has been the headline maker on numerous occasions, most notably when his winning kick helped the Chiefs to lift the Premiership for the first time in the club’s history. In May 2016, he was awarded the Gilbert Golden boot - one of the most contested prizes in the Premiership that is awarded to a leading goal kicker.

Now Exeter's all-time record point scorer kicked key penalties that saw the club win promotion to the top flight in 2010 and the Premiership title in 2017. Steenson is set to bring his career to an end following the conclusion of the 2019/20 Premiership season.