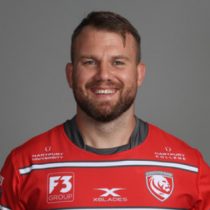 Rotherham-born prop Gareth Denman is a product of the Leeds Carnegie academy and made his debut for them in the LV=Cup in 2009 against Sale Sharks.

Following Leeds Carnegie’s relegation from the Premiership in 2011, Denman spent one more season at the club before joining fellow Championship side Rotherham Titans in the summer of 2012.

Prior to joining Leeds Carnegie, Gareth had been a pupil at Prince Henry’s Grammar School in Otley and played for Dinnington RUFC. He also won representative honours with his county, Yorkshire.

Joining the Saints in 2013 gave Denman the opportunity to make the step up from the Championship to the Premiership. Gareth has also made the switch from loose head prop to tight head prop and he will no doubt continue to impress in the coming years.

In May 2017, Gloucester Rugby confirmed the news that Gareth Denman will join the club in the summer from Northampton Saints.

The Rotherham-born front rower will link up with the Cherry and Whites after four seasons, and over 70 appearances at Franklin's Gardens.

A product of the Leeds Carnegie Academy, Denman joined the Saints in 2013 from Rotherham Titans, and his arrival at Kingsholm adds to the club's front row resources.

A key part of a successful Northampton front row since their title victory in 2014, Denman also caught the eye of the England selectors in 2015 when he appeared against the Barbarians at Twickenham.

In April 2019, Denman became Coventry Rugby’s latest new recruit having made 22 appearances at Gloucester in 2017 from Northampton.