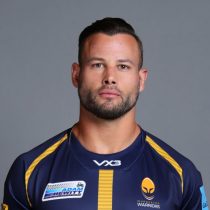 Having joined the Bulls soon after school, Hougaard emerged as the successor to Fourie du Preez, but forced his way into the starting line-up at wing before the scrumhalf legend retired.

His pace and strength coupled with a tenacious attitude make him one of the most dangerous halfbacks in the game.

After missing out on the Springbok team to play in the 2015 World Cup and not renewing his Bulls contract, Hougaard joined up with the SA 7's side in a hope to make the Rio Olympics where he went on to win a Bronze Medal.

Hougaard made 9 appearances for Warriors in the 2016/17 English Premiership season, scoring 2 tries and in early 2018 he announced an extension to his contract keeping him at Sixways until 2021.

On the international front Hougaard has won 46 caps for South Africa and was part of his country’s 2011 Rugby World Cup squad and 2016 Rio Olympics Sevens squad, where he picked up a bronze medal.