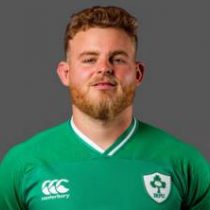 Born in Australia, Bealham made his way to Ireland in 2010 where he played for Belfast Harlequins. After 4 appearances for Ireland U20's in 2011 he made his way to Connacht where he has played ever since, making his senior debut in February 2014.

He was announced in the Irish 6 Nations squad for the 2016 season and is a versatile prop, able to play on both sides of the scrum.

Bealham qualifies for Ireland through his grandmother.

In August 2016, he extended his stay at Connacht until 2019. Bealham was named in the Ireland squad for the November Internationals. Having made an appearance off the bench at the end of the New Zealand game in Chicago, Bealham replaced Furlong in the final quarter and was sent on to contribute to the cause.

He earned his 4th cap for his adopted country against Canada in the Aviva Stadium, excelling throughout the game most notably with a clever offload to set O' Halloran away for a try.

In May 2017, he was named in the Ireland squad for the summer tour to USA & Japan after being left out of the 2017 6 Nations campaign.

Bealham had 6 Ireland caps to his name going into the 2017 June Internationals.

He was named in the training squad for the 2019 Rugby World Cup with 9 caps under his belt.

After 113 appearances for Connacht, Bealham signed a new two-year deal with the province, keeping him at the Sportsground until the end of the 2020-21 season.