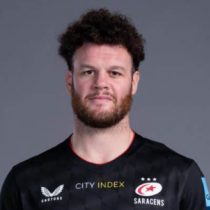 The back produced some outstanding performances for the Bedford Blues in the Championship in the 2010/11 and 2011/12 seasons which grabbed the attention of the Saracens coaches.

He had a taste of senior rugby with Sarries while his ability to be a utility back and place in a variety of positions has been a major asset to Saracens Storm.

After missing the 2016 Autumn Tests through injury, Taylor made a return and was included in Scotland's squad for the 2017 Six Nations tournament.

After the frustration of missing the entire international season, Taylor rounded off the 2016/17 season with a Champions Cup medal in Murrayfield.

In May 2017, he was named in the Scotland squad for the hree-Test summer tour having earned 18 caps.

Taylor struggled with injuries during the 2017/18 season making just 12 appearances for Saracens.

At the end of the 2017/18 season, he committed his future to Saracens by signing a new deal with the club that will see him stay until 2021.

In May 2019, he was named in Scotland's 42-man training squad for the Rugby World Cup.

He started the tournament against France, his first appearance in the Scotland jersey since September 2018.