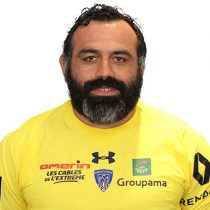 A powerful and technically brilliant tighthead prop, Davit Zirakashvili originally came from a wrestling background but switched to rugby in 2000.

He moved to France in 2002 to play with Fédérale 1 side Aubenas and moved up the leagues to the Top 14 in the 2004/05 season to play with Clermont where he joined his Georgian compatriot Goderdzi Shvelidze. He also made his debut for Georgia in 2004 against Uruguay.

He soon became an important member of both the Clermont and Georgia side. He played in all four of the consecutive Top 14 finals Clermont reached between 2007 and 2010, he scored a try in the 2008 Top 14 final against Toulouse and in 2010 became the first Georgian player to win the Top 14, and represented Georgia in both the 2007 and 2011 World Cups.

In 2010, Zirakashvili was voted Georgian sportsman of the year after some crucial performances for both club and country.

He was part of a Georgian scrum that scored three penalty tries and also a pushover try in the calendar year, he also had a memorable solo try from 45 meters out against Russia in Trabzon and an important try against Canada.

His scrummaging was a key factor in Georgia recording wins against both Canada and USA for the first time, whilst at club level he was part of Clermont's Top 14 winning side. Zirakashvili was also mentioned as one of the best tighthead props of the year in world rugby by The Daily Telegraph back in 2011.

He amassed 53 test caps for Georgia scoring 8 tries. He continued to represent Clermont until the end of the 2019/20 season by which time he had made over 350 appearances for the club.

He won two Challenge Cup titles with the club, finished as runner-up in the Champions Cup on three occasions and won two Top 14 titles.