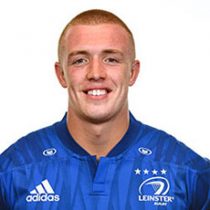 Leavy, at the age of 23, has established himself as a prominent back rower in the Leinster squad.

With a reputation at school's level as both a physical & attacking flanker, Leavy graduated from St Michael's College secondary school and progressed in to the Leinster set up, alongside fellow class mates Luke McGrath & Cathal Marsh.

With Leinster & Irish U18 & U20 Caps the elusive flanker eased into the Leinster A side and was drafted into the Pro12 squad for the 2015 season.

In April 2017, Leinster Rugby confirmed that Leavy signed a new contract at the club, the deal saw the back-rower remain at the club for the 2017/18 season and beyond.

As of November 2019, he has made 63 appearances for Leinster and has scored 70 points.

He heads into the 2019 Champions Cup with 16 appearances in the tournament and has scored 15 points.