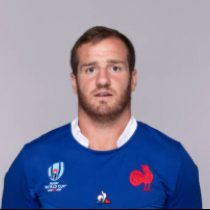 A reliable, solid flyhalf, Lopez has impressed for both club and nation over the passed few seasons.

In 2009, he signed for Bordeaux where he played 86 matches and scored over 500 points. His consistent performances earned him a call up to the National side where he made his debut against New Zealand in May 2013.

Signed for Perpignan but after playing only 13 games for them suffered knee ligament damage that ended his 2013/14 season.

Joined Clermont playing in both of their finals at the end of the 2014/15 campaign when they lost to Toulon in the Champions Cup and Stade Francais in the Top-14.

Scored all France's 15 points in his man of the match display in the victory over Scotland on his RBS 6 Nations debut in 2015. Also started at No.10 in the remaining 3 rounds that year but not capped again until Australia visited France in November

Lopez was included in the France 2017 Six Nations side. Lopez has played in 6 Six Nations matches, scoring 63 points.

Lopez played in all 5 of France's 6 Nations matches scoring 68 points. He withdrew from France's squad for their 3 match test series against South Africa.

In October 2017 Lopez suffered an open fracture of his tibia and is expected to be out of action for 6 months ruling him out of selection for the November Tests.

Lopez, named for the 2019 Six Nations has had 9 previous 6 Nations appearances scoring a massive 148 points.