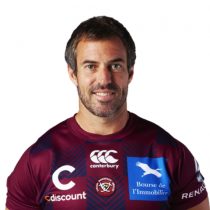 James then moved to attend The Scots College in Sydney and Sydney University, where he was a resident of St. John's College.

In 2006, after just 13 Super Rugby appearances for two clubs in two seasons, Brock James left Australia & Western Force for a new life in the French Top 14 with Clermont Auvergne.

In his first season, he played every single game with Clermont and became top scorer of the league with 380 points.

Two seasons later, between January 4 and March 28, 2009, he landed 41 consecutive kicks at goal to set a Top 14 record that has still to be broken. It was three shy of Welsh goalkicker Neil Jenkins’ world record.

At the start of the 2014/15 Top 14 season, his name was reportedly included on a list of 10 foreign players that then-coach Philippe Saint-André was considering as possible recruits ahead of the 2015 World Cup.

He spent a decade with Les Jaunards and played over 285 times for the club scoring over 2400 points.

James joined La Rochelle for the 2016/17 season on a two-year deal and will bring vast experience to Stade Marcel-Deflandre.

He enjoyed a successful opening season at La Rochelle as his experience guided the underdogs to the top of the TOP14 at the end of the regular season, eventually losing out in the semi finals.

La Rochelle narrowly last out on a playoff spot during the 2017/18 season.

That would be James' final season at the Stade Marcel-Deflandre as he signed a deal with Union Bordeaux Begles as a player coach ahead of the 2018/19 season.