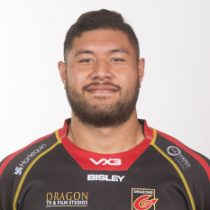 Nansen was picked for Auckland U16s and U18s, whilst attending Sacred Heart College in Auckland, a school with notable alumni including Sean Fitzpatrick, Sonny Parker, Xavier Rush and a number of other All Blacks

He was a New Zealand Schoolboys representative in 2011, where he played in a side that featured future All Blacks; Ardie Savea and Patrick Tuipulotu.

Nansen started his senior career in 2013, playing for North Harbour. He quickly became a regular in the side and went on to make 9 appearances for them as they lifted the Mitre 10 Cup Championship in 2016 and earned the right to play in the Premiership in 2017. He was named as a member of the Blues squad for the 2017 Super Rugby season.

In November 2017, Nansen chose to represent Samoa, making his international debut against Romania .

In May 2018, Dragons announced that the Samoan international had signed for Dragons on a two-year contract.

Nansen joined following a stint in the Top 14 with Stade Francais Paris.

Nansen played just 12 games in his first season after rupturing his hamstring at the Scarlets in January 2019, and broke his arm in a pre-season friendly with the same Welsh region.

He confirmed that he would depart the Dragons in June 2020.