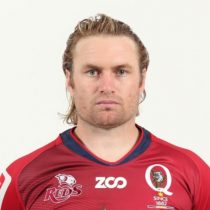 Ben has the ability to shine at scrumhalf, flyhalf or fullback although it was in the No.10 jersey where he enjoyed the majority of his success in 2012.

The Lucas name is well known in Australia with Ben's brothers Tom playing for the national Sevens side, while his other brother Matt representing the Brumbies and his youngest brother Isaac represented the U20 national side in 2018.

His first starting opportunity came against the Sharks in Durban in round four, and after guiding the Reds to an early 17-3 lead, was cruelly struck down with a month-long hamstring injury.

Ben made his Super Rugby debut off the bench against the Brumbies in March 2008 and went on to establish himself as the Reds starting scrumhalf, the start of an ongoing duel with Genia.

As the Reds number-one choice No.9 that year, he was rewarded with selection for Australia A in the late season IRB Pacific Nations Cup.

Having first represented Queensland from 2008 to 2014, notching 73 caps before heading overseas to play in France and Japan, Lucas returned for the Reds' 2018 Super Rugby season.

Lucas made 9 appearances during the 2018 Super Rugby season before confirming that he would be joining Grenoble ahead of the 2018/19 Top14 season.