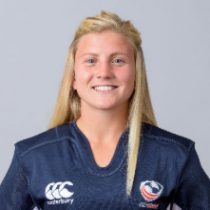 Following in her brother's footsteps, Ashlee Byrge began playing rugby at the age of 14, competing with the first-ever girls rugby team at her high school where she also played soccer.

Excelling at every level, Byrge earned High School, Junior and Collegiate All-American honors before earning a nod with the developmental Women's Falcons. In 2017 she competed in her first Falcons tour at the Super Sevens tournament in Brisbane and followed up with appearing at the 2018 Okinawa Sevens Invitational after.

Part of the Women's Sevens Residency program and a member of the Army World Class Athlete program, Byrge helped the San Diego Surfers claim a 2018 Club Sevens National Championship. After working diligently on her rugby skills, Byrge made her World Rugby Sevens Series debut at the Dubai Sevens 2018.

She was named in the starting line up to make her test debut against England in the Women’s Rugby Super Series 2019.