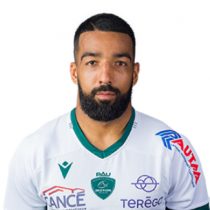 Born in Brighton, Zack Henry played for Bath University, from where he was selected as part of Team GB’s silver-medal squad at the World University Games in 2015.

He spent two seasons at Rouen in Normandy under the guidance of former England scrum-half Richard Hill. Then, after guiding Rouen to the Federale 1 final in 2017, he joined USO Nevers in Pro D2.

A goal-kicking fly-half capable of playing across the backline, he had two seasons at Nevers and emerged as one of Pro D2’s most exciting, attacking players.

His older brother Jake has had spells at Cardiff, Plymouth Albion, Clifton and Hartpury as well as with England Students 7s.

He joined Leicester Tigers during the summer of 2020. He went on to make 26 appearances for Leicester scoring 151 points before signing a deal to return to France joining Pau.