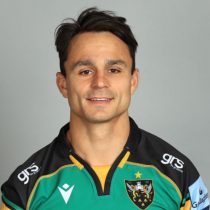 Northampton born and bred, Tom Collins first came onto the scene at Franklin’s Gardens as part of the Saints Junior Academy.

Both Collins’ father and grandfather played for Northampton Town FC, and Tom also spent some time playing for the Cobblers’ youth team before starting his rugby career at Franklin’s Gardens.

After the Northampton School for Boys student impressed at youth level, he progressed quickly through the ranks at Saints and was duly noticed by the international selectors. Collins earned his place in the England age-group set-up; scoring twice as the England Under-19s beat France in 2012, before heading to the Under-20 Six Nations in 2013.

There the fleet-footed winger was a part of the squad that lifted the trophy before linking up with the Red Rose again for the Six Nations the following year.

After earning his Saints debut in 2013, Collins made himself a regular in the 2013/14 season, featuring in 13 games that term as well as the historic Premiership semi-final win over Leicester Tigers.

The winger was named the LV= Breakthrough Player of the Season for his standout performances in the following campaign before featuring for the Wanderers in both the 2016/17 and 2017/18 campaigns where Collins collected back-to-back titles as well as helping the side to the third-longest winning streak in Premiership Rugby A League history.

In the 2017/18 season, Collins racked up his 50th appearance in Black, Green and Gold aged just 23, also featuring as Saints beat Leicester Tigers for the first time at Welford Road in 11 years – completing their first double of their Midlands rivals in 15 years.

Collins played the most rugby he had in a season in Chris Boyd’s first season at the helm, racking up 25 more appearances in 2018/19 and finishing as Saints’ second-highest try-scorer as he crossed the whitewash 11 times that term.

February 2020 saw him sign a new deal with Saints.