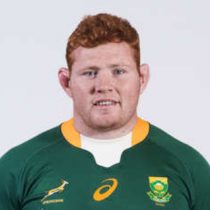 A destructive runner and mobile for his size, Kitshoff was an integral member of the victorious Baby Bok team that won the IRB Junior World Championship on home soil. In addition, he was part of the Western Province team that won the 2012 Currie Cup.

2014 was a year of frustration as he succumbed to a season-ending injury towards the back-end of the Super Rugby season and this ruled him out of Western Province's successful Currie Cup campaign.

In February 2015, Kitshoff joined French Top 14 side, Bordeaux, at the conclusion of the 2015 Currie Cup Premier Division season on a 2-year deal.

May 2016 saw him being included in the 31-man South Africa squad for their three-test match series against a touring Ireland team where he made his Test debut.

Following his stint in France, Kitshoff rejoined the Stormers and Western Province

He was used as a replacement in each of his first 18 appearances for the Springboks, before making his first start on 7 October, 2017.

The front-rower was regular for the Springboks during the 2017 season taking his test cap tally to 23 and was included in the Springbok squad for the 2018 June Internationals.

The understudy to 'The Beast' at loose-head for the Springboks, Kitshoff challenged the legendary Springbok for a starting role in 2018 and 2019 but was used as a replacement during the latter stages of the Rugby World Cup.

He won the Rugby Championship with the side in 2019 as well as the Rugby World Cup, where he came off the bench for Boks.

In April 2021, he signed a three-year contract extension with Western Province and was appointed Stormers captain.

He entered the tests against Georgia and the British & Irish Lions with 47 test caps. He was picked by Jacques Nienaber to turn out for the South Africa A team who managed a 17-13 victory over Warren Gatland's charge