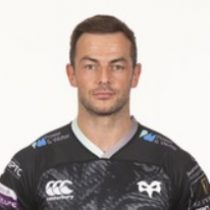 Born in the rugby league crazed Widnes, Myler began his career in the 13-man code before switching to union in 2006. Having left Wade Deacon High School, he went straight into St. Helens academy before joining local club Widnes Vikings in 2002.

Myler switched to rugby union in 2006 when he joined the Saints and made his debut in the Guinness Premiership against Saracens.

During his time at the Gardens, he established himself as the first choice fly-half with his expert game management and high-quality placekicking which helped the Saints to many important victories over the years.

His full international debut came in 2013 on England's tour of Argentina. His impressive kicking percentage earned him a callup into the English squad for the Six Nations in 2015.

In March 2018, Myler announced that he would be leaving Franklin’s Gardens after almost 12 seasons at the club.

Then third on the Premiership’s all-time list of scorers with 1,697 points, he played more than 300 times for Saints including a man-of-the-match display in the dramatic Aviva Premiership final triumph over Saracens.

A player for the big occasion, Myler has a 100% success rate with the boot in all major finals that he has played in for Northampton, kicking 23 from 23 attempts. Helping Saints to promotion from the Championship in 2008, the England-capped No. 10 kicked all the goals to guide Northampton to a European Challenge Cup title the following year as they defeated Bourgoin 15-3 at The Stoop.

He played a key role in London Irish’s resurgence, guiding them to back to the English Premiership at the first attempt.

In July 2020, he traded his London Irish jersey for the Ospreys' on a one-year deal.