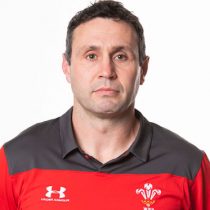 On his day, Stephen Jones was one of the deadliest flyhalves in the game. Excellent game management, a stellar boot and an exciting running game were all the hallmarks of Jones' game.

A bright talent, Jones won age-grade honours at U16, U18, U19 and U21 levels, his club rugby began at Llanelli before the Scarlets took over as the regional side in 2003. He made more than 300 appearances and scored more than 2,791 points in a scarlet jersey for club and region, helping Llanelli to reach three Heineken Cup semi-finals in his two spells. In between, he moved to France to play for Clermont Auvergne for two years. He moved away again in 2012 to play under his former Wales teammate Dai Young at Wasps. It was while he was at Wasps that he moved into coaching, finally hanging up his boots at the end of the 2012-13 season.

In the 2008 RBS Six Nations, Jones made four appearances in his second Grand Slam championship win with Wales. He scored seven conversions and 10 penalties, adding up to 44 points, despite starting the tournament as the second choice to James Hook.

On 21 April 2009, Jones was named in the squad for the 2009 British and Irish Lions tour to South Africa. During 2009, Jones cemented his place as Wales' first-choice number 10 and earned his place in the Lions squad. He started all three Tests and broke the Lions record for most points scored against South Africa in the second Test.

Jones became the record cap holder for Wales on 26 September 2011 versus Namibia, overtaking the record of 100 caps set by Gareth Thomas.

Jones was selected as part of the 30-man Welsh squad for the Rugby World Cup 2011. He played his 103rd Test against France in the semi-final which Wales lost, coming off the bench to replace James Hook in the 45th minute. His 104th and final cap came in the third-place play-off match against Australia on 21 October 2011.

He finished as the second-highest points scorer in Welsh rugby history behind Neil Jenkins with 917 and added a further 53 points from six Test appearances with the British & Irish Lions on the 2005 and 2009 tours.

In 2015, he once again returned to the Scarlets to become backs coach at his old stamping ground. He was named among the new Wales coaching team in December 2018 and went out to the World Cup in Japan to take over from Rob Howley before the first game.