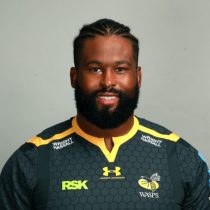 Manchester-born Simon played his junior rugby at Broughton Park Rugby Club prior to joining the Sharks academy in 2009.

Born in Manchester, England, McIntyre is a powerful prop with an appetite for ball carrying. He started playing at the age of eight.

He made six first-team appearances for Sale Sharks and was capped at England under 18 level before leaving in 2011.

He signed for Wasps in 2011, making ten Premiership appearances in his first season, and was awarded contract extensions in 2013, 2015, 2016 and 2018.He scored his first try for Wasps against Worcester in October 2012.

In his early career McIntyre was primarily a tight-head prop, and while he retains the ability to anchor the scrum from No.3, his career really took off when he made the switch to loose-head. In addition to his solid set-piece skills, he is widely admired for his mobility in the loose as well as his useful turn of pace and good footwork.

McIntyre announced long-term contract extensions with Wasps in May 2016 and he surpassed the 150 appearances for the club in the 2017/18 season.

He will rejoin Sale Sharks ahead of the 2021/22 season after making almost 150 appearances and scoring five tries for Wasps.