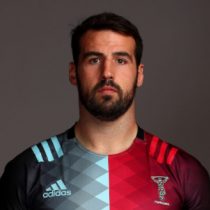 In 2009, Baldwin signed for the Ospreys and went on to amass 162 caps and 9 tries for the Welsh side. In May 2013 Baldwin was selected in the Wales national rugby union team 32 man training squad for the summer 2013 tour to Japan.

At 6 foot 3 he is quite tall for a hooker, however he is very effective at scrum time at 110kg's. The hooker has earned 34 international caps for Wales to date and was included in their 2015 Rugby World Cup squad.

Before he was a professional rugby player, Baldwin used to make huge wooden panels for house builders.

The Bridgend-born Baldwin has been praised by team manager at the Ospreys, Alan Phillips – a former hooker – as “just a step off world class, with a great work rate”, although avoiding soft penalties is regarded as a work in progress for Baldwin.

Baldwin featured in all 5 of Wales 2017 Six Nations matches.

In September of 2017, Baldwin was sidelined for 3 games and underwent 4 surgeries after being bitten by a Lion while on tour in South Africa with Ospreys.

He returned to action but failed to make the Wales end of year tour squad.

In January 2018 Baldwin was named in the Wales 6 Nations squad.

March 2019 saw him sign a deal with Harlequins. Since then, he has managed to gain 11 games for the Twickenham Stoop outfit dotting over just once in the process. He was unfortunate not to crack a nod in the 2019 Rugby World Cup squad.

In March 2021, Baldwin announced that he would be moving on from Harlequins and joining up with Worcester Warriors ahead of the 2021-22 season.

In February 2022, the hooker left Worcester to re-join the Ospreys with immediate effect.