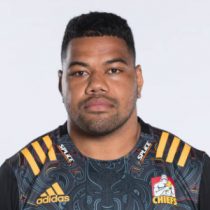 Taukei'aho was first spotted while he toured New Zealand as captain of Tonga's under-15s team, and in 2014 moved to St Paul's Collegiate in Hamilton on an internationals scholarship.

Young hooker Samisoni Taukeiaho was called into the Chiefs Super Rugby squad following injuries at hooker during the 2017 season.

The former New Zealand Schools representative represented Waikato during the 2017 Mitre 10 Cup and earned a Super Rugby in 2018.

Taukeiaho has 22 appearances for the Chiefs.

Taukei'aho is studying a Bachelor of Law part-time at the University of Waikato.